11th of February 2008, this was the date I was looking forward to since 1, 5 years and suddenly the day was there! We took our plane and everything went well, it arrived right on time in Ghana, so Abu and his friend from REVSODEP were waiting for us and took us to a hotel in Accra were we stayed for a night. Afterwards we went to Tamale by bus, our place to live for 4 weeks.

So I stayed in Tamale, a large city but not that touristy, what gave me the chance to really get in touch with the culture. I stayed in a really nice host family. First I was the only (Belgian) child but then I received 3 more sisters. In the beginning I liked the fact that I was alone in the family because than you have to socialise to get some contact, and when there are more Belgian girls it’s a normal behaviour we got together all the time. Afterwards we met Carolien, Lien, Jeanne, Dorien and Elke. They are also from Belgium and we saw each other really often, but it was nice because Dorien and Elke were living for a while in Tamale and so they showed us some places we would never had found alone.

In Tamale the people are really friendly. They accept and respect you, just as one of there own people. I have been put to work as a volunteer in the Tamale Teaching Hospital. This was arranged by the organisation REVSODEP. We met every Friday on a meeting to discuss things that were happened that week, and just things about the organisation. Because of our language differences we sometimes misunderstood each other but we could always count on each other!!

During my stay in Ghana I have been working as a volunteer in the Tamale Teaching Hospital. Trough this I had the chance to get in touch with pregnant women and women who just delivered, concerning commenting around breastfeeding, what I liked to do. In fact I have been astonished concerning the application of breastfeeding by all the women. It has several aspects like soothing a child and just feeding because this is the cheapest way of feeding (they are not all that rich to buy some food). A lot of children are easily being fed until they are 2 are 3 years old (you won’t see that in Belgium). Besides, there is no taboo around the subject, what makes it possible to feed the child always and everywhere. Although people are aware of the fact that breastfeeding is the most important feeding, the relational aspect is getting lost.

Like I said it’s a standard feeding method and extremely handy, especially in economic area (in contrast to Western countries where people aware choose to give breastfeeding or bottle feeding, probably because of there work and the taboo around the subject).

Cuddling and touching the children is not the main (or second) reason by giving breastfeeding, although this is even important for the emotional development of the child. This is what I tried to transmit to some women who just delivered a baby at the labour ward of the hospital. Immediately after the delivery the baby is separated from the mother for further care and after the care the baby is being placed in a bed, while immediate contact with the mother and starting to breastfeed has a good outcome for mother and child on relational and physiological area. The first breast milk, colostrium, contains good vitamins, minerals and greases for the baby and sucking on the nipple takes care of a good uterus contraction with the mother what stops the bleeding. Midwives did not seem to have an understanding of the fact that we try to approach this as much as possible and so I thought that education was very important with them. We have tackled this carefully to respect there habits, and it was really nice to see that they accepted our tips and further applied this after my departure!

The only difficulty I experienced was a language problem. A lot of mothers spoke only the local language, Dagbani, but with a little help from the midwives this defect was rapidly remedied. A project which has certainly been worth the effort! 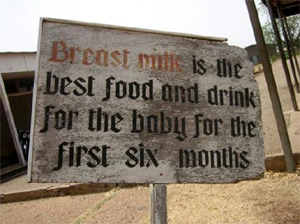 After my work in the hospital we had the chance to get in touch with the local habits. We went to the market, we went dancing, we went to visit a village in Taha, and we did several other things to learn about the culture.

When I stayed in Tamale for 4 weeks it was time to leave. Gwendolyn and I left on a Monday to start our journey. First we went to Kintampo to visit the waterfalls. Afterwards we took the bus to Kumasi.

We visited the famous market for 10 minutes but it was really busy over there and I didn’t felt that comfortable so we left and went to the cultural market in Kumasi. It was much quieter over there and we had the chance to see how every product that they are selling is made. After our visit in Kumasi we took the bus to Cape Coast, where we went to the beach, which was really dirty. It disappointed me but what disappointed me the most was the fact that they really saw us as tourists and white ladies over there. Also the children had there own ideas of our presence. Unashamed they asked us for money and food. It’s a really different part of Ghana, in comparison with Tamale. We couldn’t even explain that we are also just students and we had to pay the trip to Ghana all by our selves. Most of the people in Ghana do understand it but a some people do not have an open spirit, for several things… But that’s the way of living!

In Cape Coast we also visited Cape Coast Castle and Kakum National Park. For the last day we needed to go back to Accra to take the airplane early in the morning, but first we saw some friends who picked us up at the airport, together with Abu of REVSODEP. On Sunday morning very early we had to take our plane to Belgium. I still couldn’t believe I have really been to Ghana and suddenly we took off with the plane. The adventure was over, but not for long I think…